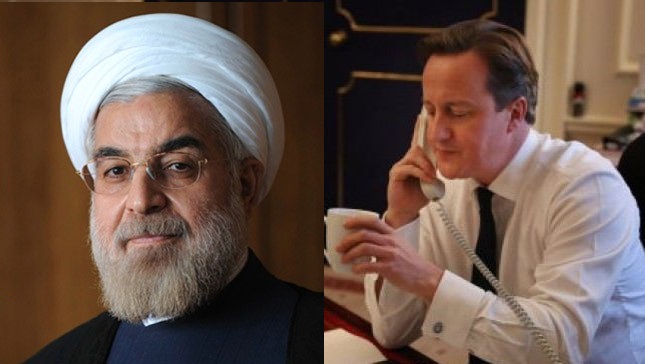 JNN 24 Nov 2013 London : British Prime Minister David Cameron has held a phone conversation with Iranian President Hassan Rouhani, in the first such call between a UK premier and an Iranian president in more than a decade.

A Downing Street spokesman said on Tuesday that Rouhani and Cameron discussed a wide range of issues, including the forthcoming nuclear talks between Iran and the six major world powers in the Swiss city of Geneva, Press TV reported.

“On Iran’s nuclear program, both leaders agreed that significant progress had been made in the recent Geneva negotiations and that it was important to seize the opportunity presented by the further round of talks which get under way tomorrow,” the spokesman said.

Iran and the five permanent members of the United Nations Security Council — Britain, China, France, Russia and the United States — plus Germany will resume their next round of talks on Wednesday.

Rouhani and Cameron also discussed the situation in Syria during the phone conversation.

“On Syria, there was agreement on the need for a political solution to end the bloodshed,” the spokesman added.

“The two leaders discussed the bilateral relationship between Britain and Iran… They agreed to continue efforts to improve the relationship on a step by step and reciprocal basis,” Downing Street said.

The two also discussed ways to create a positive atmosphere to address their mutual concerns.

In addition, Cameron expressed regret over Tuesday’s terrorist attack outside the Iranian Embassy in the Lebanese capital Beirut, where at least 23 people, including Iran’s cultural attaché Hojjatoleslam Ebrahim Ansari, were killed and more than 140 injured in two bomb explosions.

On November 13, Britain declared the decision to revive diplomatic ties with Iran by appointing a non-resident charge d’affaires.

On November 27, 2011, Iranian lawmakers voted by a large majority to downgrade diplomatic ties with the United Kingdom, in response to Britain’s decision to impose sanctions on the Central Bank of Iran over the allegation that Iran is pursuing non-civilian objectives in its nuclear energy program.

Two days after the decision by Iran’s Majlis, hundreds of Iranian students staged a protest outside the British Embassy in Tehran and pulled down the UK flag.

On November 30 of the same year, London cut off its ties with Tehran, withdrew its diplomatic staff from Iran and the Iranian Embassy in London was closed.