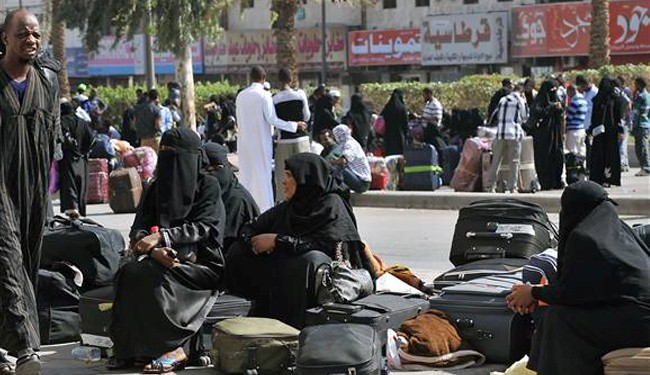 JNN 02 Dec 2013 Riyadh : Saudi Arabia has deported 71,118 “illegal” foreigners since its crackdown on migrant workers began on November 4, according to latest figures from the kingdom’s Passport Directorate.

This total is likely to continue increasing because of delays in processing deportations since many of the arrested migrants do not have identity documents.

Before carrying out deportations the authorities are also checking criminal records and taking biometric details in case the migrants attempt to return.

Arab News reports that almost 300,000 Egyptians have returned home since the beginning of July and the number of Egyptians in the kingdom has now fallen below one million.

Remittances by Egyptian workers so far this year total only 1 billion Saudi riyals ($267m) – a huge drop from 6 billion riyals in 2010.

In Yemen, officials are expecting the total of Yemeni returnees from Saudi Arabia to reach 210,000. Some 130,000 returned during the initial crackdown last March (and the subsequent “grace” period), with a further 80,000 expected during the current crackdown.

Meanwhile, the campaign to round up “illegal” workers in Saudi Arabia appears to be losing steam – at least in some places.

Arab News reports that two groups are exempted from deportation: Palestinians and Burmese. The Saudis say they will not be kicked out, even if they are caught working without a permit, “due to internal strife in their countries.”

Street vendors in Jeddah, who went into hiding when the crackdown began on November 4, have now returned in force and are “moving freely in the markets of the historical area selling fruit and vegetables at cheap prices”, according to the Saudi Gazette.

The Gazette also reports unrest among legal foreign workers. In Makkah, foreign hospital cleaners went on strike for a second consecutive day, claiming that the company that employs them has reneged on an agreement to increase their wages from $107 to $187.

Brian Whitaker has written in AlBab.com: “It’s a story too about racism in a kingdom that presents itself to the world as a model of Islamic rectitude, and it’s a story that feeds into debates about immigration in other parts of the world. If you want to know what racists really mean when they say ‘Send them home!’ look no further than Saudi Arabia.”

But Whitaker also expects that Saudi Arabia itself could change as a result of its clash with its poorer neighbors, near and far, adding: “It’s a story that also affects other Arab Gulf states, since they have all become heavily dependent on foreign labor – basically relying on those they regard as inferior beings to do dirty, menial or dangerous tasks from constructing their buildings, driving their cars, cooking their meals, cleaning up their mess and preparing their dead for burial. Many of these people work in conditions that amount to modern-day slavery.”

4 thoughts on “Saudi crackdown leads to Deportation of 71,000, while Half a Million foreign workers voluntarily returns Home”