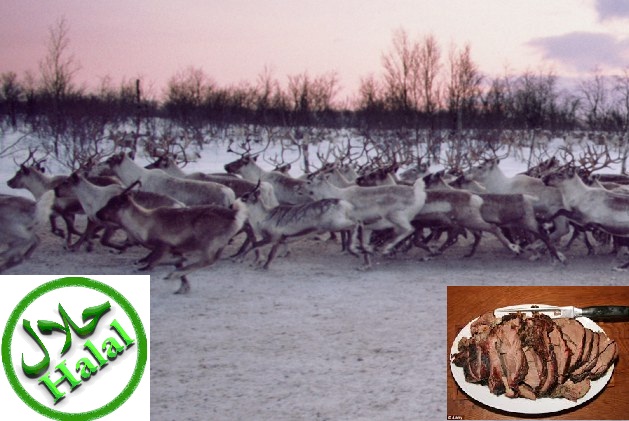 JNN 07 Dec 2013 Oslo : Granting Muslims an access to one of the tastiest meat in the world, Norway is planning to produce the first-ever halal reindeer meat to accommodate Muslims’ needs during Christmas celebrations. “It is going to be exciting to see how Muslims receive the novelty of reindeer,” Mehtab Afsar, General Secretary of the Islamic Council of Norway, told Adresseavisen on Tuesday.

“This is a completely new halal product that Muslims have not had access till before. “I have been told that this is a very good meat, but I have never tasted it myself,” he added.

The new halal reindeer was made available after a privately owned abattoir, Vilteksperten, north of Trondheim, slaughtered about 105 reindeer according to the Shari’ah law. The slaughtering was supervised by the Islamic Council of Norway.

“It’s the tastiest meat in the world,” said Harry Dyrstad, head of Vilteksperten. The new Halal reindeer will bring Muslims along with Christians on the same tables at the Christmas Eve.

After the striking impact of 2008 financial crisis on the wild meat market in Norway, Dyrstad managed to appeal for further market segments by Muslims.

The concept of halal, — meaning permissible in Arabic — has traditionally been applied to food. Muslims should only eat meat from livestock slaughtered by a sharp knife from their necks, and the name of Allah, the Arabic word for God, must be mentioned.And the sacrificial animal should be slaughtered Keeping it in the direction of the Masjid Al Haram. So It is in the Name of God “ Allah” .

Muslim scholars agree that Shari’ah provides a divine law of mercy that should be applied on all Allah’s creations, including animals. Islam also provides details about avoiding any unnecessary pain.

The new Halal reindeer will bring Muslims along with Christians on the same tables at the Christmas Eve. Christmas is the main festival on the Christian calendar. Its celebrations reach its peak at 12:00 PM on December 24 of every year.

Muslims believe in Jesus as one of the great Prophets of God and that he is the son of Mary but not the Son of God. He was conceived and born miraculously. In the Noble Qur’an, Jesus is called “Isa”. He is also known as Al-Masih (the Christ) and Ibn Maryam (Son of Mary).