JNN 20 April 2014 Manama : Regime forces in Bahrain have raided the office of the representative of Ayatollah Ali al- Sistani in Manama.While A Shia Man has been Martyred by the Police firing , and 11 Protesters Sentenced to Jail for upto five years

The religious freedoms department of Bahrain Human Rights Watch said the Al Khalifa regime’s security forces on Sunday attacked the office of Ayatollah Sheikh Hussein Al-Nijati and took away the director of the office and another scholar working with the office for interrogation, Sawt al-Manama website reported.

The two Shia scholars were interrogated and insulted for six hours before being released, the report said.

Bahrain Human Rights Watch called on international organizations and religious institutions to condemn the raid and apply pressure on the Bahraini regime to stop its oppressive measures against the followers of Ahl-ul-Bayt (AS).

A number of Islamic organizations and Muslim figures from around the world have slammed the move by Al Khalifa regime to expel the representative of Ayatollah Sistani from Bahrain.

The Islamic Council of Bahrain’s Shia Scholars in a statement said Ayatollah Nijati, representative of Ayatollah Sistani, is a Bahraini citizen and must not be threatened to leave the country.

It said the scholar has a lofty status among the Muslim world scholars and sources of emulation and that insulting him is tantamount to insulting these great scholars.

The council called on Bahraini regime to stop putting pressure on Ulama (scholars) and avoid making decisions that could provoke sectarianism.

It further urged the Organization of Islamic Cooperation (OIC) and other religious and human rights organizations in the world to play their role in applying pressure on the Bahraini regime to stop persecuting, arresting and expelling the country’s scholars.

Al-Wefaq Shia Society also described the threat against Ayatollah Nejati as unacceptable and illegal and said it violates international laws and human rights.

Sheikh Hassan Al-Tarki, director of the Islamic Culture and Media Council in Britain and the Islamic Dawa Society in Sweden also condemned the move and the attack by Bahraini regime forces on Ayatollah Nejati’s office.

The regime has also threatened to expel the cleric from the country. 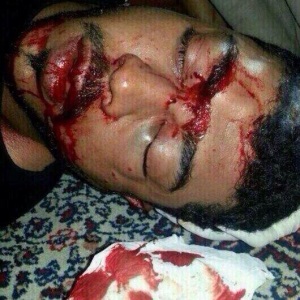 A Bahraini man died on Friday from shotgun pellet wounds sustained during clashes with police almost two months ago, rights activists said, becoming the first person to be killed in such circumstances since February last year.

Rights campaigners said Abdul-Aziz al-Abbar, 27, was hit by a teargas canister and shotgun pellets fired by riot police at a funeral procession.

One pellet penetrated al-Abbar’s brain and another his eye and he was in a coma in hospital until his death, his family said.

“Al-Abbar has been martyred today (Friday), after police directly shot his head on Feb. 23,” said the main opposition al-Wefaq on its Twitter feed.

Another group, the Bahrain Centre for Human Rights, said: “Initial reports indicate that the shooting of al-Abbar was by police officers standing at close range.”

Officials from the government’s Information Affairs Authority (IAA) and the Public Prosecution office contacted by Reuters via telephone and email could not be reached for comment on Friday, a day off in Bahrain.

The Persian Gulf Arab nation, home to the U.S. Fifth Fleet, has suffered a civil unrest since mass protests in 2011 by the Shi’ite community demanding reforms and a bigger share of power in the kingdom.

The authorities quelled the 2011 uprising but many Shi’ite areas are witnessing almost clashes with police.

Scores of Bahrainis have been killed and hundreds of others injured and arrested in the ongoing crackdown on peaceful demonstrations.

In Mid-February, UN Secretary General Ban Ki-moon called on the Bahraini regime to respect its “international human rights obligations” in dealing with peaceful protests in the country.

A Bahraini court on Monday sentenced 11 activists to five years in jail each for attacking police with iron rods and petrol bombs near Manama last year, a judicial source said.

The men were accused of taking part in an unauthorized demonstration in the Shia village of Al-Maameer, south of the capital, last June, the source said, according to AFP.

The prosecution also charged the demonstrators with assaulting a police patrol with “Molotov cocktails and iron rods”, according to the source.

Dozens of activists have been tried over incidents of unrest following Arab Spring-inspired protests in mid-February 2011, during which demonstrators called for reforms in the kingdom.

The protests led to a nationwide crackdown a month later, backed by Saudi-led Persian Gulf Arab forces which rolled into Bahrain in support of the ruling Al-Khalifa family.

Three years on and Bahrain, home to the U.S. Fifth Fleet, remains deeply divided and demonstrators frequently clash with security forces in villages outside the capital.

Last year, authorities increased the penalties for those convicted of violence, introducing the death penalty or life sentences in certain cases

Since mid-February 2011, thousands of pro-democracy protesters have staged numerous demonstrations in the streets of Bahrain, calling for the Al Khalifa royal family to relinquish power.

On March 14, 2011, troops from Saudi Arabia and the United Arab Emirates invaded the country to assist the Bahraini government in its crackdown on the peaceful protesters.
According to local sources, scores of people have been killed and hundreds arrested since the uprising began in the Persian Gulf country.