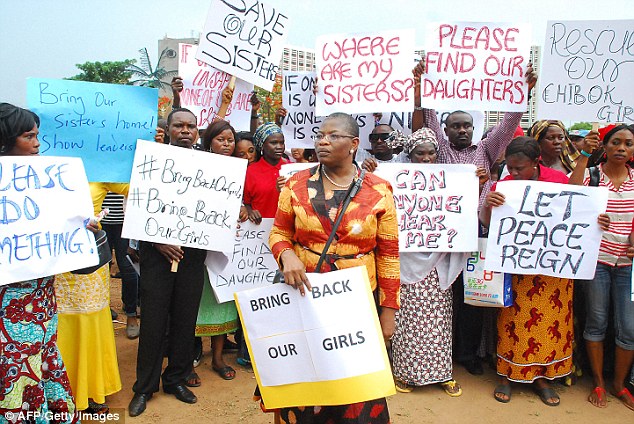 JNN 03 May 2014 Kano : Scores of girls and young women kidnapped from a school in Nigeria are being forced to marry their Wahabi terrorist abductors, a civic organization reported Wednesday.

At the same time, the Boko Haram terrorist network is negotiating over the students’ fate and is demanding an unspecified ransom for their release, a Borno state community leader told The Associated Press.

He said the Wednesday night message from the abductors also claimed that two of the girls have died from snake bites.

The message was sent to a member of a presidential committee mandated last year to mediate a ceasefire with the Wahabi Terrorists, said the civic leader, who spoke on condition of anonymity because he is not authorized to speak about the talks.

The news of negotiations comes as parents say the girls are being sold into marriage to Boko Haram militants. The students are being paid 2,000 naira ($12) to marry the fighters, Halite Aliyu of the Borno-Yobe People’s Forum told The Associated Press. She said the parents’ information about mass weddings is coming from villagers in the Sambisa Forest, on Nigeria’s border with Cameroon, where Boko Haram is known to have hideouts.

“The latest reports are that they have been taken across the borders, some to Cameroon and Chad,” Aliyu said. It was not possible to verify the reports about more than 200 missing girls kidnapped in the northeast by the Boko Haram terrorist network two weeks ago.

“Some of them have been married off to Terrorists. A medieval kind of slavery. You go and capture women and then sell them off,” community elder Pogu Bitrus of Chibok, the town where the girls were abducted, told the BBC Hausa Service.

Outrage over the failure to rescue the girls is growing and hundreds of women braved heavy rain to march Wednesday to Nigeria’s National Assembly to protest lack of action over the students. Hundreds more also marched in Kano, Nigeria’s second city in the north.

“The leaders of both houses said they will do all in their power but we are saying two weeks already have past, we want action now,” said activist Mercy Asu Abang.

“We want out girls to come home alive – not in body bags,” she said.

Nigerians have harnessed social media to protest, trending under the hashtag #BringBackOurGirls.

There also has been no news of 25 girls kidnapped from Konduga town in Borno state earlier this month.

A federal senator from the region said the military is aware of the movements of the kidnappers and the girls because he has been feeding them details that he has gathered on a near-daily basis.

“What bothered me the most is that whenever I informed the military where these girls were, after two to three days they were moved from that place to another. Still, I would go back and inform them on new developments,” Sen. Ahmad Zanna is quoted as saying at the Nigerian online news site Persecond News.

Zanna said some of the girls are in Kolofata in Cameroon, about 15 kilometers (nine miles) from the border with Nigeria. He said one of the insurgents had called a friend in Borno state to say that he had just got married and was settling in Kolofata. Zanna also said three or four days ago Nigerian herdsmen reported seeing the girls taken in boats onto an island in Lake Chad.

” About 50 of the kidnapped girls managed to escape from their captors in the first days after their abduction, but some 220 remain missing, according to the principal of the Chibok Girls Secondary School, Asabe Kwambura. They are between 16 and 18 years old and had been recalled to the school to write a physics exam.

The failure to rescue the girls is a massive embarrassment to Nigeria’s government and the military, already confronted by mounting criticism over its apparent inability to curb the 5-year-old Islamic uprising despite having draconian powers through an 11-month state of emergency in three northeastern states covering one-sixth of the country.

The military trumpets a success in its “onslaught on terrorists” but then the extremists step up the tempo and deadliness of their attacks. More than 1,500 people have been killed in the insurgency so far this year, compared to an estimated 3,600 between 2010 and 2013.

Jonathan, who is from the predominantly Christian south of Nigeria, has been accused of insensitivity to the plight of people in the north, who are mainly Muslims. People from Nigeria’s northeast feel that they are being punished because they did not vote for Jonathan’s People’s Democratic Party – the entire region is held by opposition politicians, said Aliyu, of the Borno-Yobe People’s Forum. “The northeast zone is in flames and nothing is being done because we didn’t vote PDP,” she said. “Women are raped daily, our children are being carted away like animals and sold like chickens, they (extremists) burn schools, they burn mosques, they raze entire villages.

” She said it would take decades to rebuild from the destruction that has forced an estimated 750,000 people from their homes, some into neighboring countries, fleeing the terror of the zealots as well as abuses by the soldiers.

The military’s lack of progress in rescuing the girls indicates that large parts of northeastern Nigeria remain beyond the control of the government. Until the kidnappings, the air force had been mounting near-daily bombing raids since mid-January on the Sambisa Forest and mountain caves bordering Chad.

Aliyu said that in northeastern Nigeria “life has become nasty, short and brutish. We are living in a state of anarchy.”