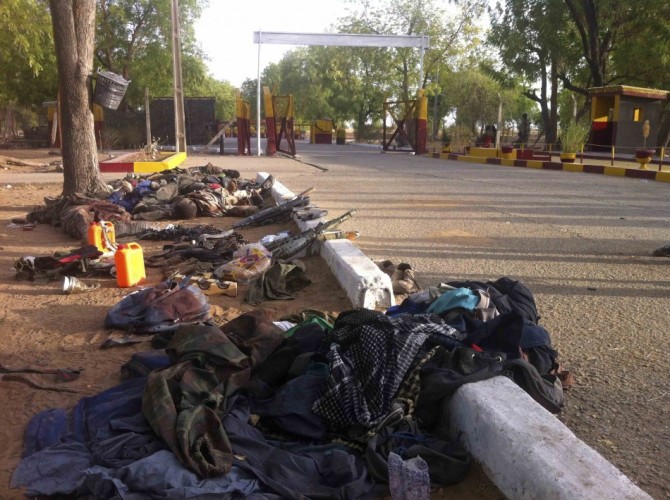 JNN 10 June 2014 LAGOS — Over 50 Wahabi Boko Haram fighters were killed over the weekend in a military operation by troops in Nigeria’s northeastern state of Borno, the stronghold of the outlawed sect, local authorities said on Monday.

The Nigerian military’s spokesperson Chris Olukolade said in a statement that troops in the northeast region of Nigeria also foiled an attack by suspected members of Boko Haram, a sect which seeks to enshrine their So called Islamic sharia law in the constitution of the secular West African country.

“Troops conducting anti-terrorists campaign in North-Eastern Nigeria have successfully averted attempted massive raid on villages in Borno and Adamawa States during the weekend. The terrorists who were on their way to attack selected communities were ambushed by troops along Bilta, Borno state on receiving intelligence report of the terrorists’ intention,” said Olukolade.

“The attack was launched on the terrorists as they filed out of the forest to embark on their mission at about 10 p.m. local time on Saturday. Over 50 terrorists died in the fierce encounter that ensued, while 30 rifles, 36 hand grenades, 7 machine guns and 11 rocket propelled grenade tubes were captured by the troops,” he said.

“Also recovered from the terrorists were over 3,500 rounds of ammunition, 6 smoke grenade canisters and locally fabricated guns as well as 4 vehicles used by the terrorists in the foiled attack, ” the military spokesperson added.

According to him, four soldiers who were wounded in the operation are currently receiving medical treatment in the military medical facility.

The Boko Haram, which has proved to be a major security threat in Nigeria since 2009, has killed hundreds of people in the last three months in many village attacks across three states in the northeast region.

More than 100 people were massacred by the Boko Haram fighters in various attacks carried out in May.

Nigeria, Africa’s most populous country, is currently grappling with security challenges, one of which is the insurgency of Boko Haram, a sect which seeks to enforce their Own Ideology’s Sharia law in the constitution , which they call as Islamic Law.