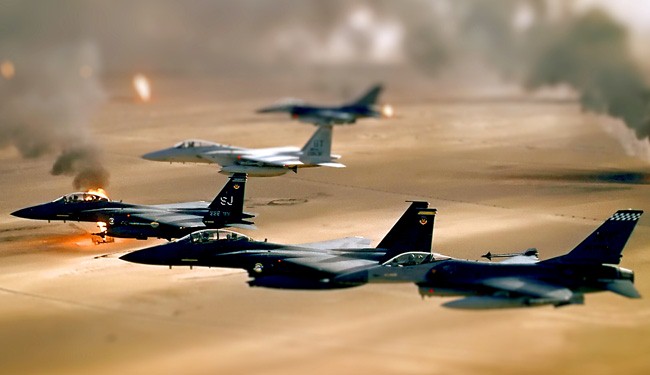 JNN 13 June 2014 Baghdad : The Iraqi air force bombed the notorious Islamic State of Iraq and the Levant (ISIL) terrorists’ positions in and around the northern city of Mosul on Thursday evening, footage aired on state television showed.

According to Al-Aalm correspondent, hundreds of Wahabi Militants from the so-called ISIL terrorist group have retreated from Mosul, due to the heavy defeat they faced by the Iraqi Army Airforce.

Mosul was overrun on Tuesday by foreign backed terrorists of so-called ISIL militants who have since tolerated lots of heavy defeats.

This is while Iraq’s ambassador to France called on the U.N. Security Council to approve extra military aid for Baghdad, including air and drone support, when it meets in New York later on Thursday.

“We need equipment, extra aviation and drones,” Fareed  Yasseen said when asked on France Inter radio what Iraq wanted from the Council.

“It must support Iraq because what is happening is not just a threat for Iraq but the entire region.”

Yasseen said as far as he knew the Iraqi government had not yet asked the United States to launch air strikes on ISIL militants who reportedly appeared to be marching towards Baghdad.

“The U.S. will only launch airstrikes if the Iraqi government asks them to, and if that happens it means it was necessary,” he said.

He said it appeared the terrorist groups’ advance had been stalled and Iraqi special forces were now stabilizing the situation north of the capital.

“What I have heard is their advance has been stopped. Special forces have been deployed and are playing their role. They have secured Samarra and the big Baiji refinery. These two regions are stabilized.”

France’s foreign ministry spokesman Romain Nadal told reporters Paris was consulting with regional and international powers on the situation in Iraq and would confer with its allies at the Security Council on Thursday.

Iraq’s prime minister Nuri al-Maliki has asked parliament to declare a state of emergency in the northern city of Mosul after it was seized by Wahabi Terrorists.

Wahabi Terrorists took control of most of the city, Iraq’s second largest, overrunning a military base and freeing thousands of prisoners in the Most Unfortunate strike against the Democratically Elected Government.

The capture of Mosul by the Islamic State of Iraq and the Levant (ISIS) – an offshoot of Al Qaeda – and its allies followed four days of fierce fighting in Mosul and other cities and towns in the northern Iraq province of Nineveh.

In a statement broadcast on state TV, Mr Maliki said the Iraqi government will provide weapons and equipment to citizens who volunteer to fight against Terrorists.

He said the cabinet had “created a special crisis cell to follow up on the process of volunteering and equipping and arming”.

Witnesses say many locals are now fleeing, among them army troops who have abandoned their posts.

The United Nations’ International Organisation for Migration said violence in recent days has “displaced over 500,000 Iraqis within and outside the city of Mosul”.

The fall of Mosul deals a serious blow to Baghdad’s efforts to fight Saudi Infested Wahabi terrorists who have regained ground and momentum in Iraq over the past year and pushed into Mosul last week.

A Reuters reporter saw policemen swapping their uniforms for plain clothes and discarding their weapons before fleeing the city. The bodies of soldiers and policemen, some of them mutilated, littered the streets.

“We can’t beat them. We can’t. They are well trained in street fighting and we’re not. We need a whole army to drive them out of Mosul,” one officer said.

“They’re like ghosts: they appear to hit and disappear within seconds”.

Earlier, police, military and security officials told Reuters news agency the Terrorists, armed with anti-aircraft weapons and rocket-propelled grenades, had taken over almost all police and army checkpoints in and around Mosul.

“We have lost Mosul this morning. Army and police forces left their positions and ISIS terrorists are in full control,” an army colonel at the local military command said.

“It’s a total collapse for the security forces.”

Two Iraqi army officers said security forces had received orders to leave the city after Terrorists captured the Ghizlani army base in southern Mosul and set more than 200 prisoners free from a high security jail.

The retreating army and police forces set fire to fuel and ammunition depots in order to prevent the militants from using them, the Iraqi officers said.

Two police sources and a local government official said the ISIS Terrorists had also stormed a jail, allowing more than 1,000 prisoners to escape, which they identified as belonging mostly to ISIS and Al Qaeda.

The army has been fighting ISIS in western Iraq since the start of the year when they overran two cities in the Sunni heartland of Anbar, which shares a border with Syria.

The United States on Tuesday condemned the seizure of Mosul by Wahabi Terrorists , saying it supported “a strong, coordinated response to push back against this aggression,” offering assistance to the government of Iraq.

“The United States is deeply concerned about the events that have transpired in Mosul over the last 48 hours where elements of the Islamic State of Iraq (ISIL) have taken over significant parts of the city,” US State Department spokeswoman Jen Psaki said in a statement.

Ms Psaki added that senior US officials in both Washington and Baghdad were tracking events closely in coordination with Iraqi’s government as well as Iraqi leaders from across the political spectrum including the Kurds.

“The United States will provide all appropriate assistance to the Government of Iraq under the Strategic Framework Agreement to help ensure that these efforts succeed,” she said.

Australia’s Defence Minister David Johnston said Australia was monitoring developments in Iraq and would “talk to our friends and allies about how we can assist the legitimate government of Iraq”.

Thousands of families were fleeing the city towards the autonomous Kurdish region, which shares a border with Nineveh province, of which Mosul is the capital.

“Mosul now is like hell. It’s up in flames,” said Amina Ibrahim, who was leaving the city with her young children.

“I lost my husband in a bomb blast last year, I don’t want my kids to follow him”.

On Monday, governor Atheel Nujaifi made a televised plea to the people of Mosul to fight Terrorists

Mr Nujaifi himself narrowly escaped the provincial headquarters in Mosul after Terrorists surrounded it late on Monday.

Meanwhile, in the town of Baqubah, 50 kilometres north-east of Baghdad, at least 20 mourners were killed when two bombs exploded at a cemetery.

Police say the group were gathered at the cemetery for the burial of a university professor shot dead the previous day.