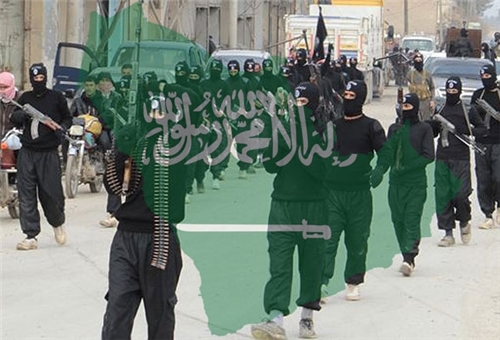 JNN 22 June 2014 Baghdad : Iraqi Prime Minister Nouri al-Maliki says militants belonging to the so-called Islamic State of Iraq and the Levant (ISIL) will turn against their Saudi Arabian and Qatari supporters who call them “revolutionaries.”

Maliki said on Wednesday that the situation in Iraq is due to a conspiracy by certain political factions.

“You hear the Saudi, Qatari and some other Arab media calling them (ISIL terrorists ) revolutionaries and that the Iraqi army is a sectarian force, but they’ve forgotten that they are living in countries brimming with sectarianism and marginalization of minorities,” al-Maliki said, adding, “We tell them and all our friends and Arab brothers to be sure that terrorism will never be limited to the Iraqi borders.”

Meanwhile, he expressed optimism that Iraq would soon weather the ongoing crisis.

Maliki also said army forces will continue their operations against the ISIL Takfiri group until victory is achieved. He expressed gratitude to Iraq’s most senior Shia cleric Grand Ayatollah Ali al-Sistani, for encouraging volunteers to join the army and help the government.

More than two million Iraqis have already volunteered to join the fight against the Takfiri militants.

The ISIL Takfiri group threatens to take its acts of violence to several Iraqi cities, including the capital, Baghdad

On June 10, the ISIL militants took control of Mosul, the capital of Nineveh Province, which was followed by the fall of Tikrit, located 140 kilometers (87 miles) northwest of the capital, Baghdad.

The Iraqi premier has blamed Saudi Arabia and Qatar for the security crisis and growing terrorism in his country, denouncing Riyadh as a major supporter of global terrorism.

According to the Anadolu news agency, Afaq TV aired commercials calling on Iraqis to boycott the products of Turkey and Saudi Arabia, saying that this boycott is the least Iraqis can do for the blood of their martyrs.

The volume of trade between Turkey and Iraq is around $12 billion annually, whilst the trade between Saudi Arabia and Iraq reached $1.33 billion in 2011.

Widespread unrest spread in northern and western Iraq when armed Takfiri groups, led by the so-called Islamic State of Iraq and Levant (ISIL), took control of some parts of the country, including that of Nineveh and Salahuddin.

Turkey and Saudi Arabia have claimed that they have not interfered with Iraqi affairs or supported armed groups in the country.

Iraqi Prime Minister Nouri al-Maliki said militants belonging to the so-called Islamic State of Iraq and the Levant (ISIL) will turn against their Saudi Arabian and Qatari supporters who call them “revolutionaries.”

The Shia Intellectuals of Pakistan have also Proposed a Economic Boycott of Saudi , Turkish and Qatari Products under the Present Scenario due to their financial Support and Training Facilities of the Takfiri Terrorists ,who have not only Martyred thousands of Shia Men and Women in Iraq , But have also attacked and Destroyed , a No. of Shrine of Noble Religious Personalities , which are Highly revered by the Shia Community , But are also of High Importance and Honour for the Sunni and other Sects of Islam.

So in this regard , the Intellectual have endorsed the Economic Boycott  on the Saudi , Qatari and Turkish Products and  Service By the Shia Muslims around the World , which May By the Use of their Airlines , or the Items Imported from these Countries to their Respective Countries.