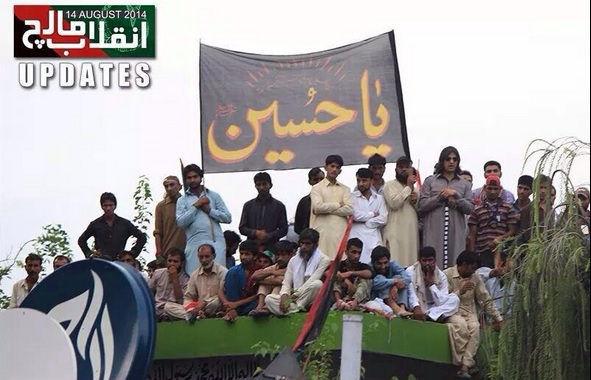 JNN 18 Aug 2014 Karachi : Pakistan has plunged further into a political crisis as anti-government protesters hold their ground in the capital, Islamabad, to demand the resignation of Prime Minister Nawaz Sharif.

Tens of thousands of people have descended on Islamabad in recent days, answering the calls from Imran Khan, the former Pakistan cricket captain and leader of Pakistan Tehreek-e-Insaf (PTI) party, as well as a Canada-based Pakistani outspoken cleric, Tahir-ul-Qadri, to push for Sharif’s departure.

At the same time Pakistan Awami Tehreek ( PAT ) Led By Allama Dr. Tahir ul Qadri , One of the Protesting Party which has shown More Power by showing a Bigger NO. of Protesters in its Protest Sit In in Islamabad , has even announced to Stage Protest Sit In across Pakistan , in collaboration with its Partners in the Movement , Majlis e Wahdat e Muslimeen ( MWM ) , Sunni Ittehad Council ( SIC ) , and others , which have already started as the First Protest Sit In on the Badin – Hyderabad Highway , Blocking the Traffic Movement and Disconnecting Karachi with Punjab and UpCountry.

At the Other Hand Pakistan Tehreek e Insaaf ( PTI )  , Led By Imran Khan has announced to Present their Resignations from National Assembly , and Provincial Assemblies , except Khyber Pakhtoon khawa KPK , as they are in Government in the KPK Province , and as they have a Coaliting Government with Jamaat e Islami , which is resisting the Dissolution of KPK Parliament .

As Allama Tahri ul Qadri , has even given a time frame of 48 Hrs Ultimate to the Sitting Governemnt of PML – N , which is about to expire in another 4 Hrs time , at about Midnight of 18 – 19th  Aug PST, as Qadri has even notified in his earlier speech of this afternoon that , if the Govt did not respond to his demands than he may go for More Strict actions against the PML – N Govt.

Both Khan and Qadri have left offers of talks from incumbent Pakistani prime minister dangling. Khan has not yet responded to the government’s call for talks, seeking more details. Qadri, however, has rejected the offer outright.

“Qadri will not speak to any of the committees. Our demand is simply that the government should step down,” a spokesman for Qadri, Shahid Mursaleen, said, noting that Qadri’s supporters will not budge.

Khan and Qadri have called for Sharif to quit, accusing him of corruption and ballot rigging during last year’s parliamentary elections. Both of them want new elections to be held in Pakistan.

They vowed to keep up anti-government demonstrations until their demands are met and Sharif leaves office.

Khan has warned that he may not be able to stop his supporters from marching on parliament and the fortified enclave where most foreign embassies are located.

This is the same PML – N Govt Led By Nawaz Shariff, which has gone at any length to facilitate the Taliban Terrorist in the name of Negotiations , as Directed by the Saudi Government , But which was finally taken over by the Pakistani Top Brass of Army , and a Very Long Awaited  Operation “ Zarb e Azb ” , was conducted , which has broken the Back Bone of the Terrorist Organisations , But the Terrorist Sleeper Cell in the Settled Areas of Pakistan , who have already fled from North Waziristan , and have taken refuge in the Cities like Karachi , Quetta and Different Cities of Punjab . Due to which the Target Killing of Shia Community is still going On .

And Now in the Present Political Situation has Ripened for a Change in the System , and a Long awaited Operation Clean Up in the Settled areas of Pakistan , which can cleanse the whole system , and can make the Pakistan in Letter Spirit Peaceful and Patriotic , which can not only eliminate the Taliban and their Allied Terrorist Organisations , but can also cleanse the Present Political Parties who have their own Terrorist Squads for the elimination of their rivals , as the Most of the Political Parties Bosses are actually Mafia Bosses , as NO Body can Oppose them , Until and Unless the Opponent has even a Terrorist Squad , who can Counter the threat .