JNN 15 Nov 2014 Riyadh : Concerns are rising among Muslims over Saudi Monarchy’s controversial plan to demolish the birthplace of Prophet Muhammad (PBUH) in the holy city of Mecca.

The UK-based Islamic Heritage Research Foundation said on Wednesday that the House of Mawlid, where Prophet Muhammad was born in AD 570, is planned to be destroyed by the end of the year and replaced with a royal palace for Saudi King Abdullah ibn Abdilaziz for his visits to Mecca.

“The site of the Prophet’s birthplace has again come under imminent threat of being permanently forgotten under concrete and marble,” said Irfan Alawi, the executive director of the foundation.

“Now that Hajj is finished, the 24-hour construction work has started again. They have finished the expansion on one side of the mosque (Masjid al-Haram). The royal palace, which will be five times bigger than the current royal palace, is to be built into the side of a mountain and will overlook the mosque,” he added.

Over 98% of the Saudi Kingdom’s the Birth Place of Islam’s Most Sacred and Religious sites have been destroyed regularly since 1985, according to the U.K.-based Islamic Heritage Research Foundation

Holy Kaaba, that is Islam’s holiest point, has been encircled by arched porticos erected some three centuries ago by the Ottomans, above dozens of carved marble columns dating back to the 8th century. But earlier this month, any vestiges of the portico and columns were reduced to rubble, cleared to make way for the Saudi government’s expansion of Mecca’s Grand Mosque.

The Destruction of the Holy and sAcred Places of Islam is done under a Multi billion project, launched in 2011, under the Pretext to meet the challenges of accommodating the millions of pilgrims who visit Mecca and Medina every year. Around 2 million currently visit during Hajj alone, the annual pilgrimage that happens during the last month of the Islamic calendar. But it is actually the destruction of the Holy Places are part of a much wider government campaign to rub out historical and religious sites across the Kingdom. As the Monarchy wants to Implement its Wahabi Ideology , which restricts any type of Religious sites and Places .

Over the last few years, mosques and key sites dating from the time of Prophet Muhammad PBUH , have been knocked down or destroyed, as have Ottoman-era mansions, ancient wells and stone bridges. Over 98% of the Kingdom’s historical and religious sites have been destroyed as the Process has been accelerated since 1985, estimates the Islamic Heritage Research Foundation in London. “It’s as if they wanted to wipe out history,” says Ali Al-Ahmed, of the Institute for Gulf Affairs in Washington, D.C

Though the Saudi rulers have a long history of destroying historical sites, activists say the pace and range of destruction has recently increased. A few months ago, the house of Hazrat Hamza, the Prophet Muhammad’s uncle, was flattened to make way for a Meccan hotel, according to Irfan Al Alawi,executive director of the Islamic Heritage Research Foundation. There have even been rumored threats to Prophet Muhammad’s tomb in Medina and his birthplace in Mecca.

A 61-page report, published recently in Saudi Arabia’s Journal of the Royal Presidency, suggested separating the Prophet’s tomb from Medina’s mosque, a task “that would amount to its destruction,” Alawi says. “You can’t move it without destroying it.”

Moreover, he alleges, plans for a new palace for King Abdullah threaten the library atop the site traditionally identified as the birthplace of Muhammad. Even now, signs in four languages warn visitors that there is no proof that the Prophet Muhammad was born there, “so it is forbidden to make this place specific for praying, supplicating or get [sic] blessing.”

Dr Alawi, one of the few voices to publicly oppose the destruction, claimed that religious police are posted outside the library to prevent worshipping.

The rooms of the House of Mawlid are under the ground, and in 1951 a library was built over them to preserve them. This has now been closed to pilgrims. Signs on the building warn worshippers against praying

Wahhabism, the prevailing Saudi strain of Islam, frowns on visits to shrines, tombs or religio-historical sites, on grounds that they might lead to Islam’s gravest sin: worshipping anyone other than God. In recent years, the twin forks of Wahhabi doctrine and urban development have speared most physical reminders of Islamic history in the heart of Mecca. The house of the Prophet’s first wife, Khadijah has made way for public toilets. A Hilton hotel stands on the site of the house of  Abu Bakr, the famous Companion of Holy Prophet . While the Kaaba now stands in the shade of one of the world’s tallest buildings, the Mecca Royal Clock Tower, part of a complex built by the Bin Laden Group, boasting a 5-story shopping mall, luxury hotels and a parking garage.

Saudi officials did not respond to interview requests, but in the past, they have always taken cover for their destruction of the Most Holiest Places of Islam , under the Pretext of expansion project , and it is not far away that they ll , if God forbidden gets a chance then they ll even some day , Destruct the Holy Grave of the Prophet Muhammad , as the Wahabi Mythology Doesn’t allow Paying respect to the Graves of the Holy People or of their Loved Ones .

They are doing Expansion of only the Grand Mosque , which contains the Holy Kabaa , while all the other Important and the Most Sacred and Historically Important Places for Islam they have already Destroyed and Rest of the Remaining few they are Planning to Destroy  and Destruct , By Implementing their Wahabi Ideology and Rest By asserting their Power and Influence Upon the Weak Muslims .

While the Monarchy like all the Monarchies have even their Courtyard Clerics , who even defend all their Plans and Ambitions under the Flag of Islam , as The Arab country’s Grand Mufti, Sheikh Abdul Aziz Bin Abdullah al-Sheikh, recently defended the demolitions, saying they are necessary in boosting the capacity of the mosque. 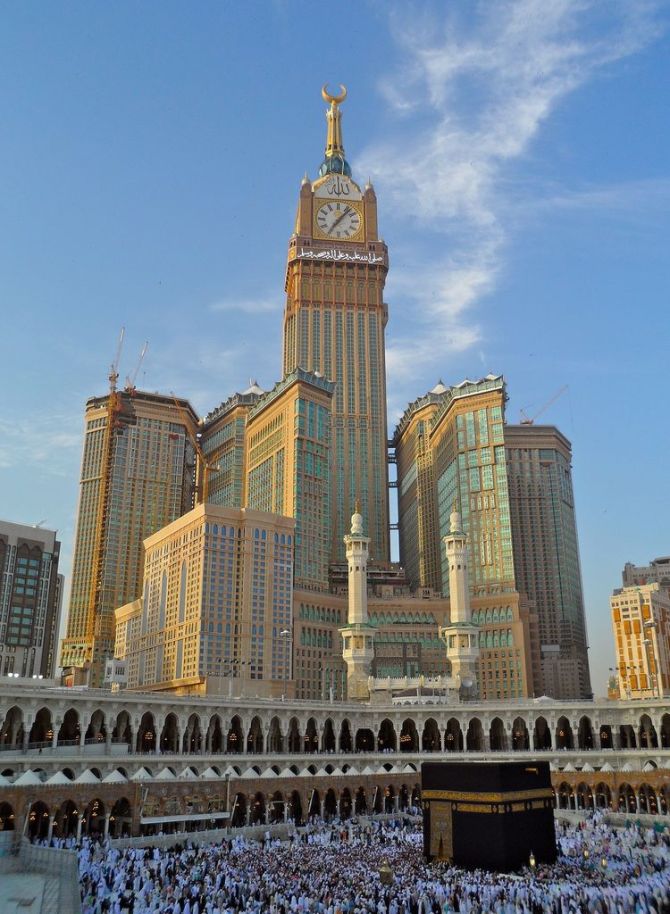