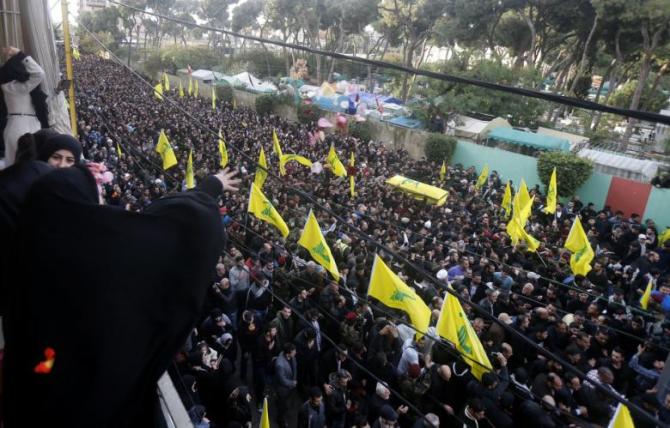 JNN 20 Jan 2015 Beirut : Lebanese resistance movement Hezbollah confirmed the death of six fighters in the new Israeli airstrike on the southwestern strategic Syrian city of Quneitra. Iran also confirmed the Killing of One of its IRGC General in the same airstrike

In a statement issued on Sunday, Hezbollah said 25-year-old Jihad Mughniyeh, the son of slain Hezbollah top commander Imad Mughniyeh, and five other fighters lost their lives in the fresh Israeli aerial assault against Syria.

The martyrs were reportedly on a field reconnaissance mission in Quneitra when an Israeli military helicopter targeted their vehicle.

Now the question on everyone’s lips is when and how Hezbollah will respond. Analysts said the targeted assassination of several high-level Hezbollah fighters in Quneitra is considered a game changer in the ongoing war between Hezbollah and Israel.

“These assassinations have changed the rules of the game,” Amal Saad, a professor at the Lebanese University and an expert on Hezbollah, told Al Jazeera. “Hezbollah will respond, and very swiftly this time. It is in a position today where it can respond without leading to a full-blown war.”

“The latest attack is significant,” Saad added. “This was not a random strike on a convoy; this was a targeted assassination, which probably took a lot of planning. It was a very valuable target, so the party has to respond.”

But a source close to the Lebanon’s Hezbollah says the movement’s response to Israel’s deadly attack on members of the resistance would be “painful.”

“The attack against six Hezbollah members will have a painful and unexpected response, but it can be assumed that it will be controlled to prevent an all-out war,” the sources told the Lebanese As-Safir Arabic political daily on Monday.

Lebanese Parliament Speaker Nabih Berri has hit out at the Tel Aviv regime for disrupting stability in Lebanon.

Lebanon’s al-Manar TV said later in the day that Tel Aviv is “playing with fire that puts the security of the whole Middle East on edge.

The Syrian information minister has slammed as a “serious mistake” the recent Israeli airstrike on the southwestern strategic Syrian city of Quneitra.

“Israel has made a serious mistake when it attacked on Syrian soil today,” Omran al-Zoubi said in an interview with Lebanese al-Manar TV on Sunday.

Al-Zoubi said the airstrikes proved that the Tel Aviv regime was cooperating with terrorist groups, including the al-Qaeda-linked al-Nusra Front.

The Syrian minister said that Israel needs the terrorist groups to act as a “buffer zone” that separates it from the Syrian army and people.

Whoever fights the Syrian people and army is putting himself in the service of the Zionist project against Syria, Palestine and the Arab nation, he added.

“We condemn all actions of the Zionist regime [of Israel] as well as all acts of terror,” Iranian Foreign Minister Mohammad Javad Zarif told Press TV early on Monday, lashing out at Israel for committing acts of terrorism.

Zarif further censured the acts of terrorism against the people of Lebanon and the resistance movement, saying that “this has been a practice followed for a very long time,” the top Iranian diplomat noted. “The policy of state terrorism is a known policy of the Zionist regime [of Israel],” he added.

On Sunday, an Israeli military helicopter fired two missiles into Amal Farms in the strategic southwestern city of Quneitra, close to line separating the Syrian part of the Golan Heights from the Israeli-occupied sector.

The Israeli military has so far declined to comment on the attack.

Press TV reported that the Israeli military has gone on high alert for the fear of a possible Hezbollah response to the regime’s new act of aggression.

Analysts believe the new Israeli assault is yet another attempt by Tel Aviv to change the balance of war in favor of the militants fighting against the Syrian government.

The new Israeli aerial raid comes as Syrian soldiers, backed by Hezbollah resistance fighters, have made numerous gains against the militants operating in Quneitra.

The Tel Aviv regime has carried out several airstrikes in Syria since the start of the nearly four-year-old foreign-sponsored militancy there.

Damascus says Tel Aviv and its Western allies are aiding the extremist terrorist groups operating inside Syria since March 2011.

The Syrian army has repeatedly seized huge quantities of Israeli-made weapons and advanced military equipment from the foreign-backed militants inside the Syria.

Iran’s Islamic Revolution Guards Corps (IRGC) confirms the killing of one of its generals in an Israeli airstrike on the occupied Golan Heights in Syria that also killed six members of the Lebanese resistance movement, Hezbollah.

“A number of fighters and forces of the Islamic Resistance along with Brigadier General Mohammad Ali Allahdadi were visiting the region of Quneitra and were attacked by a military helicopter of the Zionist regime,” the IRGC said in a statement on its website on Monday.

“This brave general and some members of Hezbollah were martyred as a result of this crime,” it added.

It said Allahdadi had traveled to Syria to provide consultation and help the Syrian government and nation counter the Takfiri and Salafi terrorists in the war-stricken country.

He gave “decisive” consultation about ways to stop and thwart the Israeli regime’s plots and crimes, it added.

The statement emphasized that the killing of the IRGC general and Hezbollah fighters would strengthen the movement’s determination to fight the Israeli regime.

“The Zionist regime’s [Israel] criminal move to violate Syria’s airspace once again showed that the terrorist plot of the ISIL and Takfiri groups has been hatched in line with policies of the arrogant and Zionist system and in coordination with leaders of the White House and the occupying regime of al-Quds against the Muslim community,” the IRGC said.

They are not committed to any international regulations and human and moral principles to achieve their evil goals, it pointed out.