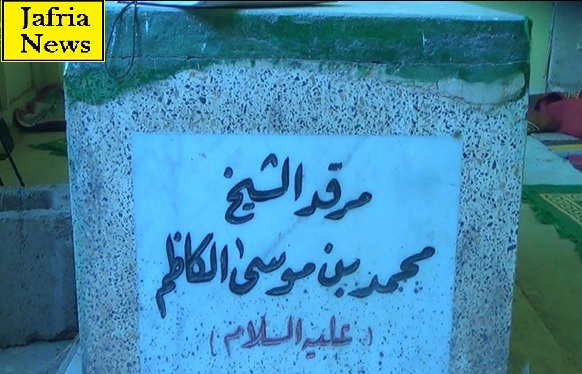 JNN 23 Feb 2015 Baghdad : In the latest pictures released by ISIS takfiri terrorists it is seen that the takfiri group has blown up the Holy Shrines belonging to scholars of Islam including the holy shrine of Muhammad Ibn Musa al-Kazim the son of Imam Mosa al-Kazim. the ISIS terrorist’s group blew up the Virgin Mary Church and burns more than 8 thousand rare books, manuscripts in Central Library of Mosul.

According to News Agency, ISIS takfiri terrorists have tried to destroy tombs of great scholars and elites of Shiite Islam in Dialah province, Eastern Iraq.
This takfiri group, considering any religious symbols blasphemous, on Friday destroyed some of the Shiite scholars’ tombs in Dialah by blowing them up.

In the pictures released by the extremist group it is shown that one of these shrines which belongs to Imam Musa al-Kazim’s (AS) son Muhammad Ibn Musa al-Kazim was blown up by bomb and destroyed to the ground.

The terrorists are ordered to destroy these holy shrines by Hisbah (their authority in religious matters) which is derived from Wahabi ideology, using explosives and bulldozers.

Many mosques and holy shrine have been destroyed by the takfiri group since their inception. In a statement the group called their actions glorious.

The takfiri group backed by Wahabis in Saudi Arabia and the US have tried to desecrate and destroy many holy sites in Iraq and Syria including Holy Shrines in Samarra and Damascus but have always failed to lessen the love of Muslims all around the world for the Imams and their holy shrines.

A local source in Nineveh province revealed on Saturday that the ISIS Terrorists had burned more than eight thousand rare books and manuscripts in the Central Library of Mosul.

The source said that “The ISIS elements burned this evening the Central Library of Mosul in al-Fathilah area, which resulted in destroying more than eight thousand rare book and manuscripts, dating back to ancient historical eras in one of oldest libraries in Nineveh.”

It is reported that people tried to prevent the terrorist group elements from burning the library, but failed.”

In another incident ISIS members blew up the Virgin Mary Church north of Mosul.

On Thursday evening, Terrorists of the ISIS group detonated the Virgin Mary Church north of Mosul using improvised explosive devices .The ISIS elements used the church as their headquarters for leaders of European, Arab and East Asian nationalities to live there.

The explosion destroyed the Church entirely.