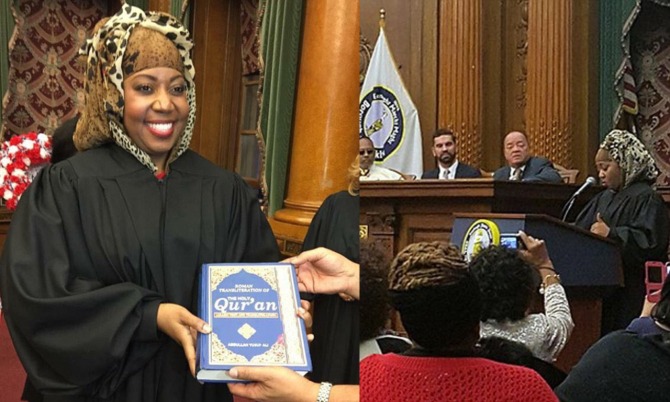 JNN 25 Jan 2016 New York : Judge Carolyn Walker-Diallo, a Muslim woman, took oath as a civil court judge in New York on Thursday, while swearing to abide by the US Constitution placing her hand on the Holy Quran.

In the United States and the majority of Western countries, politicians and members of the courts are sworn in to their positions while placing their hand on the Holy Bible when they take their oath.

A video posted on Facebook shows the moment when Judge Walker was sworn in as a civil court judge of the 7th Municipal District at the Brooklyn Borough Hall in New York City.

“All is praise is indeed due to the Most High! I am humbled that my community has entrusted me with the immense responsibility of ensuring that everyone has notice and a fair opportunity to be heard in the halls of justice,” Walker wrote on her website.

The video of her ceremony has prompted many comments in favor of her induction.

Carolyn received a Juris Doctor from New York law school. She serves as first vice-chair of Brooklyn community board 5, board chair of the George Walker Jr. Community Coalition, Inc., board member of the east New York restoration local development corporation, and a member of the 75th Precinct community council.

Judge Carolyn Walker-Diallo is also a trained mediator with the New York peace institute, according to her biography.