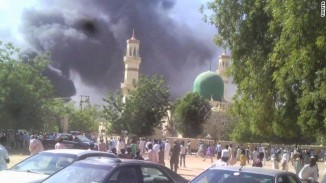 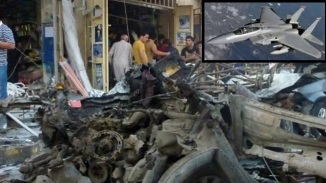 JNN 21 Oct 2014 Baghdad : A bomb explosion in Iraq’s capital city of Baghdad has left 17 Shia worshipers Martyred and dozens wounded. At the same time Dozens of Shia , Sunni and Kurd Volunteers , who have joined forces to fight ISIL Terrorist have been Killed in the Airstrikes by the US and Allied forces ,which are suppose to be against the ISIL Terrorists, but on the ground have killed the Volunteers fighting against the Occupying ISIL Terrorists.
END_OF_DOCUMENT_TOKEN_TO_BE_REPLACED

JNN 23 July 2014 Baghdad : On Sunday, the terrorist organization of the Islamic state in Iraq and the Levant, has taken responsibility for the bombings that hit yesterday different parts of the capital, Baghdad, pointing out that the suicide bombers who carried out two bombings, one is German and the other is Syrian nationality. END_OF_DOCUMENT_TOKEN_TO_BE_REPLACED 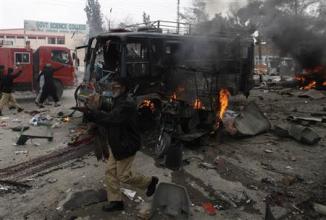 JNN 14 Mar 2014 Islamabad :  At least ten people, including children and one woman, were killed and 31 sustained injuries in a bomb blast in front of the Science College at Jinnah Road, downtown of the Quetta, on Friday. While another Suicide blast took place in a bazaar in Peshawar on Friday leaving at least eight people dead and injuring 32 others, Press reported. END_OF_DOCUMENT_TOKEN_TO_BE_REPLACED

JNN 25 Feb 2012 ISLAMABAD : MNA Kurram Agency Sajid Hussain Turi on Saturday rebutted the impression that Mehdi Militia or Haideri Taliban had claimed responsibility for the attack on a bus stop in Peshawar and asserted that extremists were trying to fuel sectarian violence in the country by launching a blame game. END_OF_DOCUMENT_TOKEN_TO_BE_REPLACED